Micrographics, Inc. to Present on Record Digitization and Scanner Software at Florida Clerk of Court

Micrographics, Inc., will be attending the 2017 Winter Florida Clerk of Court and Comptroller’s Conference in Kissimmee, FL. Micrographics will be presenting on centralized scanner management software in the conference’s Solutions Lounge. Also, appointments are being set up with Clerk’s offices interested in document conversion services and data storage. Micrographics: Scanner Central Software Date: Wednesday, March 1, 2017 Time: 10:00am Location: Palms Ballroom A Audi

The January 16, 2017 AP article celebrating the efforts of the Lafevor brothers, from University of Texas at Arlington to digitize parochial records in Cuba, took me back to a similar trip to Cuba in February, 1989. Traveling with Gene Lyon, of the University of Florida, and Gene’s wife Dot, along with a grad student, our team’s objective was to microfilm parochial records previously identified at two locations as the destination for resettlement by some of the nearly 2,500 S

The Loss of Court Records to Fire and Flood

“There is nothing that was salvageable,” said New York State Office of Court Administration Executive Director Ronald Younkins. “They had an outside company that specializes in restoration of documents and disaster recovery. They came and — nothing.” On March 22, 2015, a seven-alarm fire consumed 85,387 boxes of court records from all five boroughs of New York City. These records ranged in dates from 1873 to 2006. According to Younkins, recreating every file would be “impos

As the adoption of body-worn cameras increases, law enforcement offices all over the United States are facing the challenge of what to do with all that data. To give you an idea of the problem, one 30-minute video takes up approximately 800 MB of storage space. In Oakland, Calif., the city’s Police Department has 600 body cameras in the field and as a result, the department now captures almost 7 TB of video data per month. When you combine this with other law enforcement vi 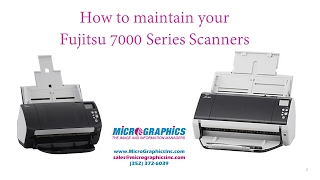 Do you want to keep your scanner healthy? And do you want to avoid the dreaded black line? This video demonstrates the proper maintenance techniques and tricks to help you save money.